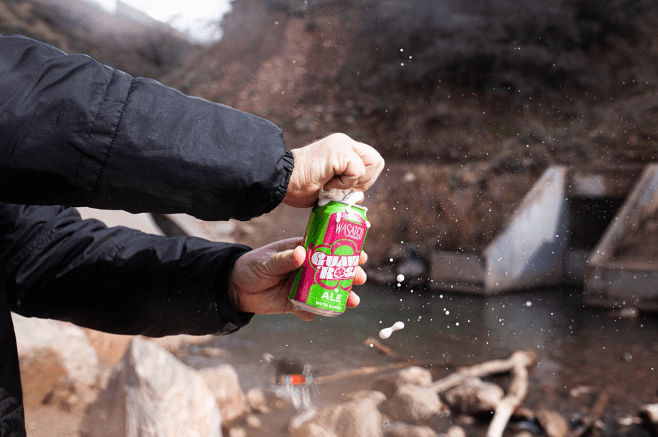 Wasatch Brewery is adding a delicious new ale to its seasonal lineup: Guava Rosa. Enjoy a (metaphorical) day in the sun and sand with this 7.1% ABV Mexican-inspired ale. Brewed with real guava to lend sweet and tart notes that shine against a subtle hop profile, this cerveza is truly a fiesta in a can. Whether you enjoy this brew under a palm tree, from a hammock in your backyard, or on your couch, this is the beer you will reach for all Summer long. Guava Rosa is on shelves now in 6-packs of 12 oz. cans.

Guava Rosa was inspired by a trip south of the border to Guadalajara, Mexico, for a collaboration brew with award-winning brewery, Cerveza Loba, which recently celebrated its seventh anniversary. Brewers from Wasatch, Oskar Blues and Loba came together to create a special anniversary beer that targeted the flavors of a Mexican Chocolate Cake using locally-sourced ingredients like chocolate from Tabasco, along with Lima and Zapote Negro from the orchards surrounding Guadalajara.

Wasatch Brewmaster Jon Lee shopped at the local markets and was impressed by the quality of the indigenous ingredients, along with the flavors and spirit of the region. His favorite beer of the trip was the Loba Paraíso – one of Loba’s most popular beers. The Paraíso utilizes hundreds of pounds of fresh Guava from the same markets he had visited. As Jon enjoyed one of many Paraíso’s, he realized “the bright, tropical fruit flavors are so refreshing in the desert climate of Mexico, and would translate perfectly to the high desert for which Utah is known.”

When Lee returned to Utah, he would channel that inspiration into brewing Guava Rosa, an ale based around the fresh, tropical flavors of guava. “Guava Rosa drinks like a cocktail but with the heart of a beer, and this is what I’ll be reaching for all Summer long,” said Lee.

Wasatch is no stranger to unfiltered, fruited beers, so Guava Rosa is a natural addition to their lineup. Their flagship, Apricot Hefeweizen, has been a fan-favorite for years, and last September, Wasatch launched a new seasonal, Pickup Lime, a tart, refreshing sour ale that’s low in bitterness and high in drinkability at 4.8% ABV. Pickup Lime and Apricot Hefeweizen make up the Fruit In A Box 12 pack, which includes 6 cans of each for a fruity, sessionable duo.